A Pair of Clubs

“I want you to protect and covet the gifts of love you have to share and to trust your soul enough to let it lead you.” – Meggan Watterson, REVEAL – A Sacred Manual for Getting Spiritually Naked

I was super psyched and especially proud of the ladies this week. Up until this point, I normally drive the Women’s Club meeting, asking for activity ideas for next time, reminding them to set the next date, preparing a snack, etc. But now they are starting to do more of these things themselves, which is exactly what we want to ultimately make this activity sustainable and ensure they continue learning and having fun after my service finishes in December. It feels good to know they’re enjoying it enough to make sure it doesn’t end!

Our ice breakers tend to be loads of laughs. Perhaps you’ve done some of these yourself? One consisted of taping the name of a famous person to each lady’s back and having her guess the name by asking questions of the other ladies in the room  (Is my person male? Female? In Paraguay? Europe? Religious figure? Celebrity? Singer? Futbolista? Etc). Another was called “Sorts” where I call out 2 words, one for each side of the room, and the ladies sort themselves based on their preferences. For example, stand on the right side of the room if you like Team Cerro, or the left if you like Team Olimpia. Other contrasts included radio vs TV, salt vs sugar, asado (BBQ) vs mandio chyryry but the one that was sure to bring down the house I saved for last. With dramatic pause I announced dessert vs sex. The room erupted into giggles and slaps on each others’ backsides. Game over. Mission accomplished. Let the meeting begin.

Ladies of the Club de Mujeres trying to guess the name of the famous person taped to their backs.

I’m also excited that the local nurse is really interested in joining us and doing a health-related talk each time. This is much needed in my community and of great interest to me personally. She talks about nutrition, diabetes, exercise and preparing great snacks, and I back her up on the importance for exercise by doing a short dance or yoga class. Because the ladies have been specifically asking how to whittle their midriffs I taught them how to do planks this week and, as encouragement to practice at home, I announced The Great 60-day Plank Challenge. On May 2 the ladies will compete to see who can hold a plank the longest (the original proposal was that they had to hold it longer than me but they shot me down and wanted to compete against themselves. Ok, that’s probably more fair.) Winner gets a liter of my highly-coveted jasmine honey. If you think that’s not much of a prize you don’t know how much Paraguayans love their honey. There might be bloodshed (just kidding on that last part.) They practiced getting horizontal right then and there. Here’s a plank highlighting the muscles it works, perfect for core strengthening:

Proper plank pose highlighting the muscles it strengthens throughout the core. This will whittle your middle.

The Club de Niños (Kids’ Club) and the English class are essentially the same group of kids so every Saturday for about three hours we study English then have fun with Kids’ Club activities. We wrapped up this week’s English class learning to pronounce the alphabet. Then we went outside and, with me calling out letters, they raced each other to make letter shapes in the grass using their bodies. It was a scream. Literally. Every Club meeting (and sometimes if we need a break during English) we practice yoga. This week to boost concentration and attention I told them each child would need to teach one posture to the group next week. I had them create fun, positive SuperHero names like Inteligente Hilda, Genial Gerardo, Linda Luz Maria (linda is Spanish for ‘pretty’), Super Sophia, etc, we drew names and they chose their posture. They seemed pretty excited about this and I’m looking forward to next week.

And since The Great 60-Day Plank Challenge was so well-received with the ladies I offered it to the kids as well. In early May the kids will compete against each other to see who can hold plank position the longest. However, this group decided they wanted to start competing TODAY and a tiny, scrawny scrappy gal won with a time of nearly 1 1/2 minutes! I was super impressed but the defeated boys were not! This, of course, motivated them into action for home practice, not to be outdone next week. This was followed by a game of Duck, Duck, Goose (aka in Spanish as Pato, Pato, Ganso), coloring, and futbol. Send in your suggestions for other fun, kid-friendly exercise games. We’re open to ideas! 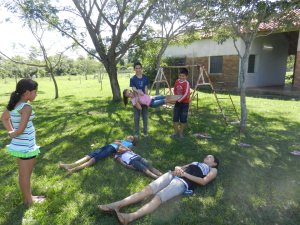 Kids’ Club made teams to race each other in forming letters of the alphabet using their bodies. Squeals of laughter. This is letter H. H is for hilarity.

At the beginning of my service I did not foresee myself working with kids; my interest was more in agricultural work with adults in their fields and gardens. But I’ve got to admit that my recent involvement with the new Kids’ and Women’s Clubs has been some of the most fulfilling experiences of my service. I love how life can surprise us with a course correction that turns our expectations upside down and uncovers a whole new facet of ourselves, revealing interests or gifts we never knew we had. The lesson: be open. Always be open.

**Check out the Eye Candy page for new photos!!**

My thought about (mostly) good stuff about us humans

Adventures with Wen - Chronicles of a Spirited Traveler

Chronicles of a Spirited Traveler