Posted on September 8, 2013 by Sunflower

Your life. Your version of success.  – Danielle LaPorte

Despite everyone being down with the “Gripe” (pronounced GREE-pay), or common cold, it’s been a pretty stellar week. Success on many levels.

I’ve felt the benefits of much fantastically powerful energy from the universe these last few weeks and it, coupled with the arrival of purely blissful tropical weather, has provided one of the most creative weeks of my adult life.

The cherry on top was just yesterday when I gave a major presentation to my community that was well-received and the results of which got community members very excited. I don’t think they ever realized how many resources they have available to them right in their community or the multitude of new opportunities available using those existing resources…all right here, all this time, at their fingertips. A few of them looked at each other in disbelief as if to say, “Really? It’s been here all along?” The result was an empowered community who learned how to identify and prioritize their needs, find new uses for existing resources and thus giving me some good direction and a whole new set of projects! A true success by all accounts.

But most of the time, the joys and successes of my job don’t come neatly packaged as well-attended meetings with positive outcomes. Sometimes it’s comparing recipes for mandio chyryry with a local señora or being invited to the San Juan Fiesta of Fire in June where, in the darkness after sunset, people are literally kicking flaming soccer balls and throwing blazing chunks of straw at each other, delighting in being chased by a man in a bull’s costume whose horns are on fire, or climbing a greased pole to get the prize at the top (this took collaboration of 4 men standing on each others’ shoulders). 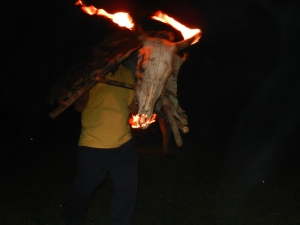 Sometimes it’s visiting a neighbor to discover she has six brand new baby goats and falling in love with the little guys and being invited to visit every day.

Or working in an environment that exults my senses and insists I pause with appreciation like the friendly wave of a neighbor heading to the field, a perfect tropical breeze, the glowing crescent of a new moon, the arrival of new birds and butterflies for the season, outdoor yoga on my brick patio in a warm splash of sun, siesta in a hammock under a guava tree humming with happy foraging bees, the sweet call of goat babies wanting their mamas, fireants that leave a rash of itchy bites… 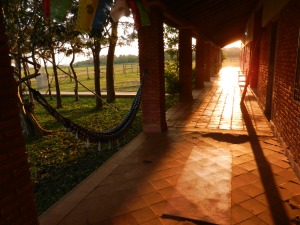 Sunrise yoga on the patio. Nothing finer.

Speaking of unfortunate situations (like stepping on fireants), sometimes you’re so far from success you want to evaporate, dissolve into the soil, teleport yourself back to your house and never come out again. Here are a few things that haven’t been so successful:

Awkward Moment #951: Asking the local Professora if she had worms when I meant to ask if she had onions.

Awkward is the name of the game…The morning after making arrangements with a neighboring señora to work together in her field, I arrived at her house (fashionably late, as dictated by “Paraguayan time” standards), to learn from her confused look that not only had she forgotten our plan but she had made other arrangements in the last 14 hours (Paraguayans really do live only in the present moment.) Now I know I miss a lot due to my limited language skills but I KNOW I wasn’t wrong about the agreement. I offered to come back later or another day but she insisted that no, we’d go out now. We quickly hoed two rows and she cut me loose. What does one say? The following day she finally admitted she’d forgotten. Ultimately we laughed that she had killed 2 corn plants and I killed none then I showed off my fire ant rash that memorialized the event. Tranquilo. Success.

And just to ensure that I’ll be a pro at “Awkward Moments” when I finish my service….there’s my old favorite: To my 10 community members who spent all afternoon bringing my garden to life building a fence, turning sod and dodging tarantulas I MEANT to say ¨Thanks so much for your help.¨ (“tanto” in Spanish) After seeing confusion and concern on their faces I raced to my dictionary and to my horror realized I´d INADVERTENTLY said ¨Thanks for your STUPID help.¨ (“tonto”) Yup. What a difference a stinking vowel makes. This is my life in PY.

I’ve had readers from over 30 countries visit my blog.

Eating raw, organic carrots can temporarily soothe a sore throat and cough (refer back to the Gripe at the top).

A local rooster visits me daily (because he thinks I’m the chuck wagon) and coos like a cat in heat. No joke.

We’ve recently had an invasion of flying ants – you can see tens of thousands of them in the setting sun- and when they land they instantly shed their wings and start crawling. Freaky!

One thought on “Celebrating Success, Awkward Moments, and Creative Energy”