“A woman who follows the crowd will usually go no further than the crowd. A woman who walks alone is likely to find herself in places no one has ever been before.” – Albert Einstein

Eli, my favorite senora in site, and her husband were returning from the chakra (crop field) in the horse-drawn cart full of sugar cane and mandioca as I was going TO work in the same field, where my demo plot is. The forecast called for 100% chance of rain and the clouds were ominous.

Me: Yep. It’s going to rain. I’m just going to work for a little bit.

Eli: You’ll end up bathing in the chakra. There’s no time to work before the rain. Go home.

I continued walking and worked in the chakra about half an hour until the first sprinkles fell then beat feet for home. No joke, I pushed open the door, which was pushing back against me due to the strong wind coming in from the windows on the opposite side of the house, and got inside JUST as the skies opened and torrential downpour ensued. I was spared by seconds.

…and finished on the futbol field tonight:

Eli: Did you get a shower in the chakra this morning?

Me (smiling): No! But it was close, mere seconds!

Eli: I told you it was going to rain but you didn’t listen to me.

Me: Your forecasts are always accurate but I knew I had a little time to spare.

She laughs at my appreciation of her cloud-reading skills and goes back to tending goal for the kids’ futbol game. 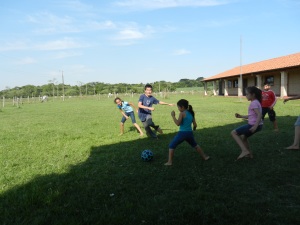 My thought about (mostly) good stuff about us humans

Adventures with Wen - Chronicles of a Spirited Traveler

Chronicles of a Spirited Traveler